When DJI announced last year that the DJI Phantom 4 Pro Vs. 2 line would be discontinued, it wasn’t because the popular UAV wasn’t selling still selling. In spite of the popularity of the Mavic and Mavic 2 lines, the Phantom 4 sales more than held its own. But the problem truly lie in the supply chain. The company had run out of parts they needed to build the Phantom, and as such, the Phantom 4 Pro was fated to fly off into the sunset. But now, the drone is back, and with a fresh supply of parts, it’s business as usual for DJI.

‘DJI is excited to announce that the Phantom 4 Pro V2.0 will again be available for purchase on January 6, 2020. This popular and versatile drone had been temporarily out of stock because of a shortage of parts from a supplier. DJI sets high standards for the extremely advanced components in our products, which require advanced lead time and technical precision to manufacture. We apologize for any inconvenience this may have caused our customers, and we thank them for their patience as we ensure the Phantom 4 Pro V2.0 will continue to meet their high expectations.’ 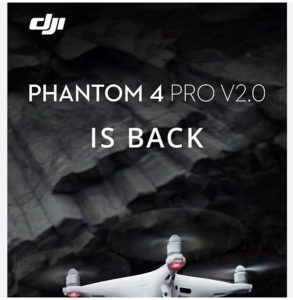 The DJI Phantom drone line became hugely popular with you tubers and independent filmmakers, especially since it started to record 4K video. Version 2 of the Phantom 4 Pro line offers a 1″ 20MP CMOS sensor that shoots 4K video at up to 60 fps.  Version 2 of the Phantom 4 Pro also comes with 5 directional obstacle sensing, 4 directional obstacle avoidance, redesigned low noise propellers, and its Ocusync data transmission system.  Many also concluded that the Phantom 4 camera had better resolution than the Mavic Pro 2 models.

With so many new features, it wasn’t long before the Phantom 4 vs. 2 became sold out with many models. The ongoing parts shorts left DJI to rely on third party resellers to fulfill demand. But that didn’t last long, and as such, the company made the difficult decision to suspend and discontinue the Phantom 4 Vs. 2.  They also moved to kill the rumored Phantom 5, leaving many to conclude that the iconic DJI drone design had run its course. 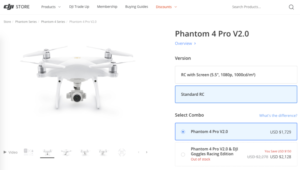 In the last year, DJI had focused on the Mavic Pro 2 line, and the new Mavic Mini. But drone fans wanted something to fill the gap between the consumer oriented Mavic Pro 2 and the professional grade DJI Inspire 2. After a year of allowing its parts supply chain to replenish itself, DJI decided to relaunch the Phantom 4 Pro vs. 2 with a price point of $1729.

But if you are a user of the DJI Smart Controller, you’re going to have to rely on the standard Phantom 4 controller for now, as the latest firmware for the new controller does not currently support the Phantom 4 line.

Meanwhile rumor has it that while the Phantom 5 isn’t coming any time soon, a MAVIC 3 may be coming by Summer.