The Edelkrone JibONE Bring Motion Control to the Jib

When it comes to out of the box thinking from a camera gear company, nothing flares up my gear acquisition syndrome (GAS) more than Edelkrone. The company is notoriously disruptive with unique, yet compact designs that offer filmmakers a low footprint with high performance.  And now, with the JibONE, Edelkrone is taking that same kind of out of the box thinking to the JIB arm by introducing motion control into the mix.

Compact and light, at 61 x 17 x 15cm and 12 pounds, the modular JibONE introduces motion control settings into the standard jib design thanks to a power motor at the end that acts to control the pan and tilt movement of the jib, which can be controlled by a mobile app. It comes with four 1kg counterweights and can work with camera setups weighing up to of 11 lbs/5.5kg. Fully extended, the JibONE offers a maximum travel length of 1.64 ft, and can tilt at an angle up tp 22 degrees.

The JibONE is powered by a pair of Canon LP-E6 batteries, or two NP-F models. Run time is around two hours of regular use, and users can use alternate power configurations like AC or V Mount/Gold mount battery power as well. 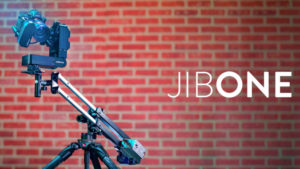 Users can also connect the Edelkrone HeadONE to the end and greatly expand the camera shot options from above, or below the jib arm. The iOS or Android app can program the JibONE and HeadONE to create complicated  tracking shots, live target switching, and there’s also a “switcher mode.”

But all that movement comes at a cost, the Edelkrone JibONE is $999 for the basic setup, without the HeadONE addition. But the beauty of the Edelkrone ecosystem is, that modular components live and work together, meaning you can start with the basic model, and then add a module later when you need it.

But if you’re really on a tough budget, you can always go the DIY route like this YouTuber did. He took his gimbal and mounted it on a tripod with an extension tube and a few clamps. It’s not as slick as the JibONE, and you won’t be able to program to repeat a shot with exact repetition, but hey, it can get the job done in a pinch.